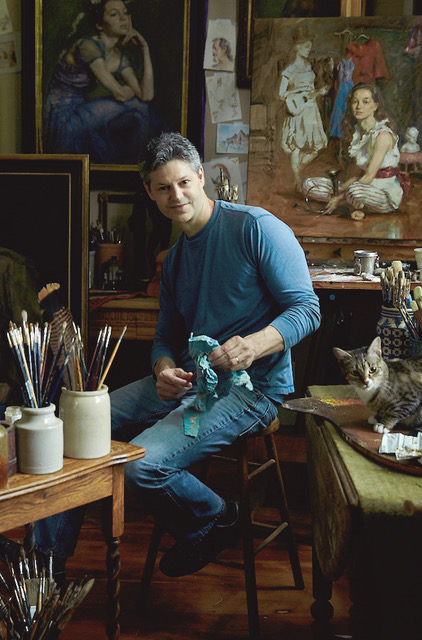 As seen in The Scout Guide, Hunt Country

Perhaps best known for the movement and draftsmanship of his figure work, Rob was inspired as a child by an old copy of Hogarth’s Dynamic Figure Drawing.  His interests in drawing blossomed. He pursued his dream and earned art scholarships from the Morris Louis Foundation, The National Academy of Arts and Letters, and The Knights of Columbus. These, along with a baseball scholarship, aided him in earning BFA and MFA degrees from George Washington University in Washington DC. He has since combined his fascination with anatomy, art history, and technique to produce work in a variety of disciplines including drawing, watercolor, painting, and sculpture.

Rob has been selected as a “Living Master” by the Art Renewal Center where he won the Grand Prize in their 2020 international competition with his painting “Spartan.” He received their “Collections Magazine” Award in 2017, and in 2016 his painting “5th Circle” took First Place in the Imaginative Realism category. In April 2003 Rob received the Grand Prize in the annual International Portrait Competition for the Portrait Society of America. Now on their Advisory Board, he regularly teaches and demos at portrait conferences and helps judge the annual competition. Rob is an honorary member of the American-China Oil Painting Artists League and a visiting instructor at The National Gallery of Art in Washington DC, demonstrating old masters’ techniques.

Rob’s sculptures include a series of carved marble reliefs which are now permanently located in the National Shrine of the Immaculate Conception in Washington, DC. A life sized marble statue of Mother Teresa also stands in the Shrine, based on his design. His fifteen foot crucifix hangs above the alter in a “Our Lady of Mercy” church in Potomac, Maryland. He was elected as a member of the National Sculpture Society in 1999.

Rob is well known for his inspiring and informative teaching style. He holds workshops and museum history tours throughout the United States and Europe, and teaches regularly at The Art League of Alexandria, VA. In 2009 he pioneered one of the first online teaching courses for American Artist and, since Covid, teaches his own online classes. Liberace Studio has produced a series of tutorial dvds/downloads focused on figure, portrait and anatomy drawing and painting (see workshop page).

Rob and his wife, artist Lina Liberace have two daughters, also artists. He is represented by The Principle Gallery in Alexandria, Virginia.

Podcast about art “Suggested Donation” interview by artists Tony Curanaj and Edward Minoff in Miami at the FACE conference, March 26, 2019;

“Top Twenty Artists Under the Age of Forty.” The Artists magazie, February 2006.

Christine Egnoski. “The Art of the Portrait, Words from the Wise.” International Artist, April/May 2006;

M. Stephen Doherty. “An Update on the Masters.” American Artist Magazine, Special Issue on Drawing, May 2002; cover and pp. 22-31. Read the complete text.

October 2000, The Classical Gallery, Alexandria, VA – The Figure and Portrait

As seen in The Scout Guide, Hunt Country